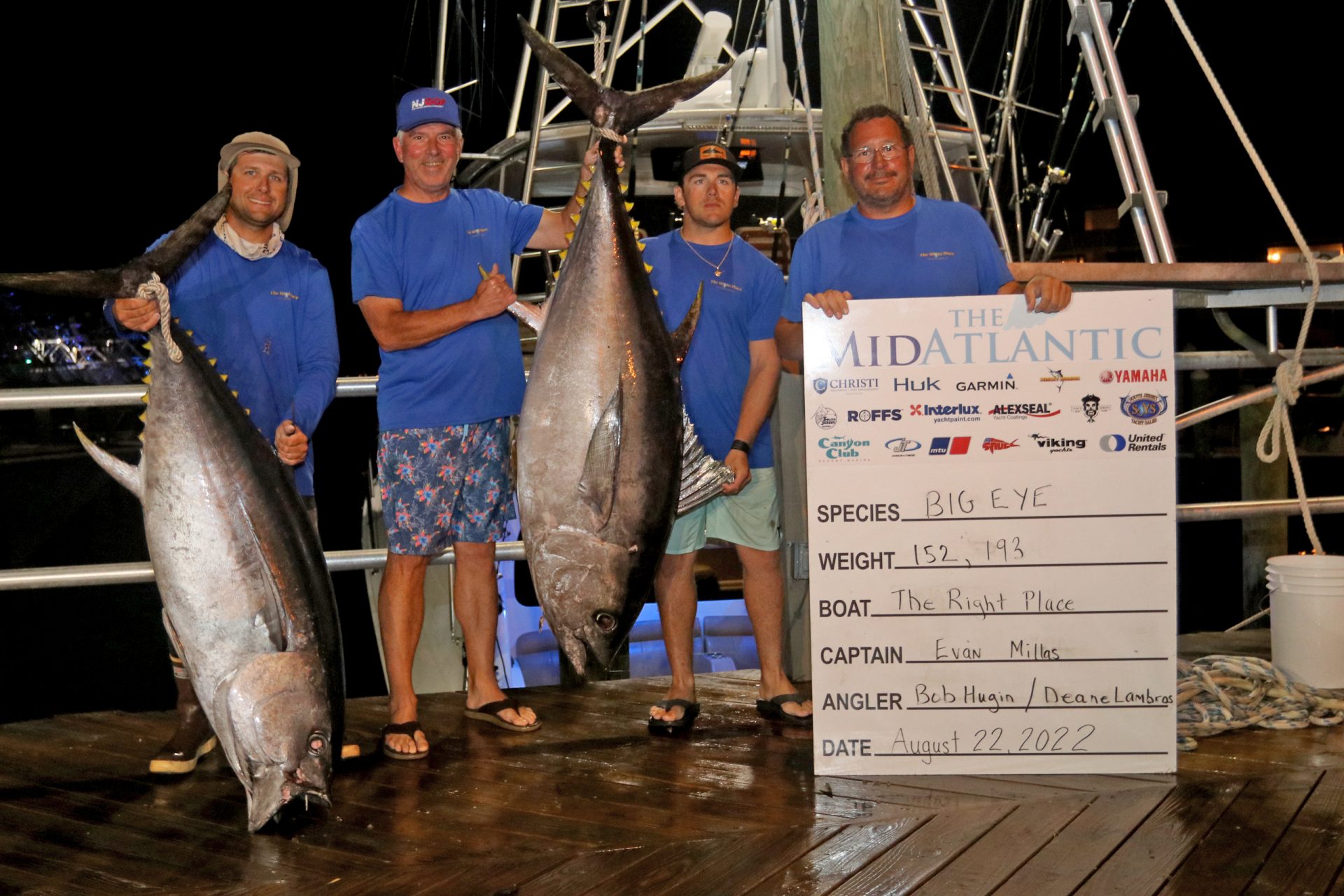 Day Two of the 2022 MidAtlantic dawned sunny and bright as the overcast sky and intermittent rain of Monday had moved out. The offshore forecast though was another story as a brisk breeze that kicked up yesterday afternoon was forecast to continue overnight leaving nearly all of the tournament’s participants tied to their slips and using one of their “Lay Days” at both tournament venues today as they waited for better weather later in the week. It was an early night for tournament staff at the weigh stations at Canyon Club Resort Marina in Cape May and Sunset Marina in Ocean City as only three boats gave it a go today including one out of Cape May and two out of Ocean City. That being said, no qualifying fish were weighed and no changes to any of the categories of the leaderboard occurred. Looking ahead, the weather forecast for the offshore canyons looks very good for the next three days and there’s plenty of fishing left. In fact, after today 75 boats have two days fishing day remaining while another 103 have three days to go.

In the billfish categories, with no qualifying white marlin weighed on Day Two all three places in the category remain vacant. Michael Pintozzi’s of Langhorne, Pennsylvania aboard his Random Chaos continues to lead the blue marlin category with his 490-pounder caught on Day One. Right behind in second place is Manasquan, New Jersey’s Justin Branning whose Three’s Enough weighed a 469-pounder on Day One. With no qualifying blue marlin weighed on Day Two third place remains vacant.

The Right Place of Summit, New Jersey’s Bob Hugin continues to hold the top two places in the tuna category with big eyes of 193 and 152 pounds which were weighed on Day One. Random Chaos remains in third place with an 80-pound yellowfin tuna, also weighed on Day One.

Michael Murray of Brick, New Jersey aboard his Caitlin currently holds first and second place in the wahoo division with 43 and 28 pounders weighed on Day One. Third place remains vacant. Though several have been caught, no dolphin over the minimum weight of 20 pounds have been weighed so all three places remain vacant.

For further information contact Tournament Director Aaron Hoffman at 609-884-0177 or visit the tournament’s web site at www.themidatlantic.com where you’ll find all the facts, figures and information about this year’s event including a complete rundown of calcutta payouts, rules, points, and an event schedule. You’ll also find live feed of the nightly weigh-in sessions from Cape May and Ocean City each night from 5 p.m. to 9 p.m. Monday through Friday of tournament week. On social media follow the MidAtlantic on Facebook at The MidAtlantic Tournament; on Twitter @midatl and on Instagram @themidatlantictournament.

A Wild Day Three at the MidAtlantic!