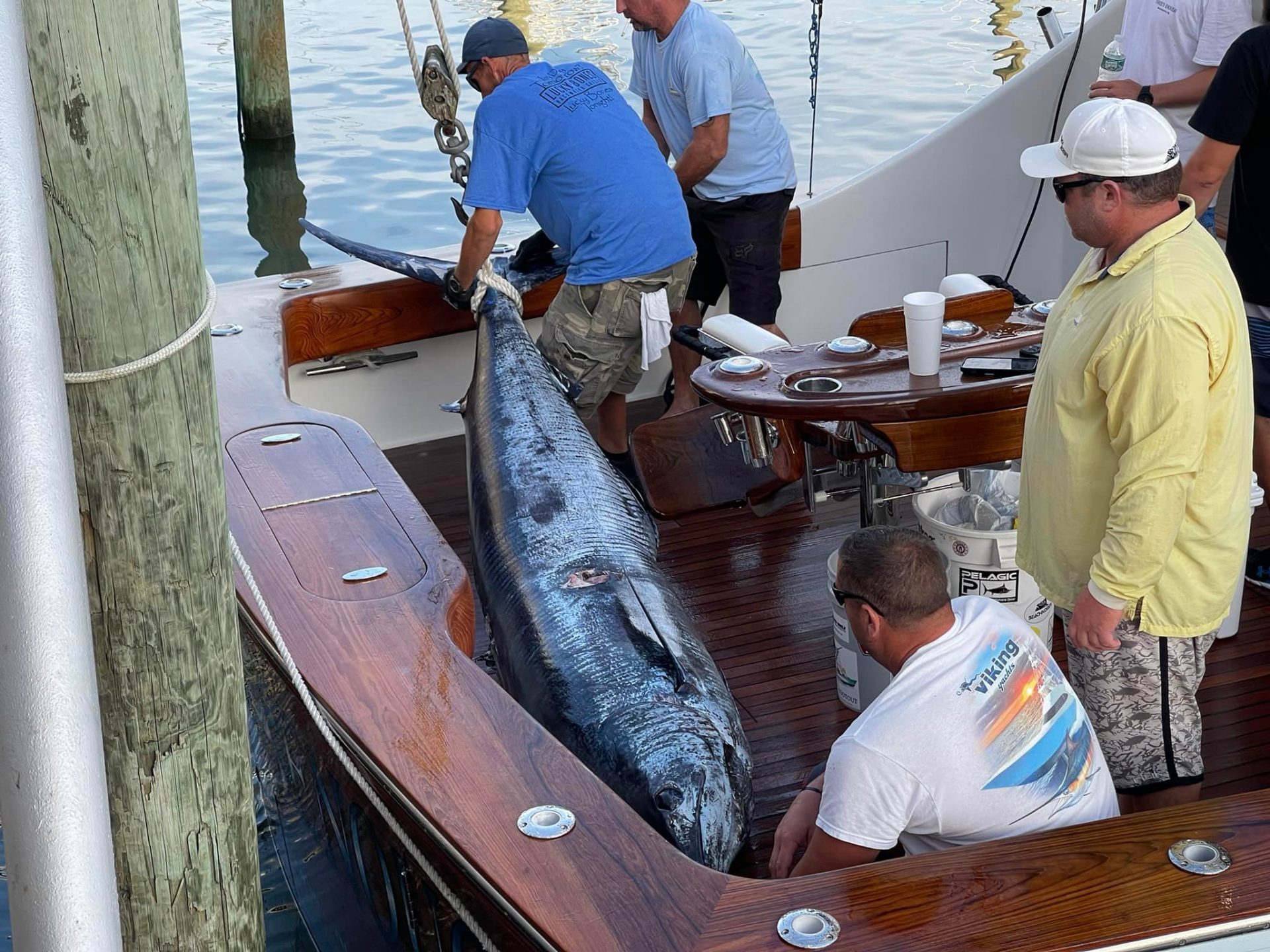 The first day of fishing at the 2022 MidAtlantic got off to a damp start as a weather system pushed in from the south and brought showers and breezy conditions for the 69 boats that gave it a go one Day One. It was a late night for tournament staff on Sunday at both venues as they kept busy totaling up entries and tallying the total purse but at this point we can confirm 178 boats are in the line-up and the total cash purse is well over $5.2 million!

Monday’s weigh-in session got off to an exciting start as two blue marlin were weighed in Cape May. Captain

Michael Pintozzi aboard his Random Chaos out of Langhorne, Pennsylvania jumped to the early lead in the category after weighing a 490-pounder that measured 116½” for angler Ben Stern. Captain Kyle Sherman put Justin Branning’s Three’s Enough based out of Manasquan, New Jersey in second place with a 469-pounder for angler Brian Komer that measured 113¾”. Third place remains vacant.

Though billfish were hard to find for most of the tournament fleet today tuna provided a lot of action and the tournament staff worked well past the 9 p.m. deadline in Cape May as numerous boats had checked in and were waiting in line to weigh fish. Well over three dozen tuna were weighed including two large big eyes and one exceptionally large true albacore. Captain Evan Millas put Summit, New Jersey’s Bob Hugin aboard his The Right Place into first and second place after weighing a pair of big eye tuna of 193 and 152 pounds for anglers Hugin and Deane Lambros. In addition to weighing the heaviest blue marlin today, Michael Pintozzi’s Random Chaos is currently in third place in the tuna category with an 80-pound yellowfin. Worthy of note is a 70-pound true albacore weighed aboard John Stavola’s Milling Around from Jupiter, Florida that fell just a few pounds short of the New Jersey state record for the species.

There were no white marlin or dolphin weighed on Day One and both categories remain vacant. Some of the boats with multiple billfish releases on Day One include Joe Bernert’s Quick Raise released two blue marlin while James Cahill’s Harmony, Kevin Putman’s Is That So and Rob Gauthier’s Bar South each released two white marlin.

For further information contact Tournament Director Aaron Hoffman at 609-884-0177 or visit the tournament’s web site at www.themidatlantic.com where you’ll find all the facts, figures and information about this year’s event including a complete rundown of calcutta payouts, rules, points, and an event schedule. On social media follow the MidAtlantic on Facebook at The MidAtlantic Tournament; on Twitter @midatl and on Instagram @themidatlantictournament.