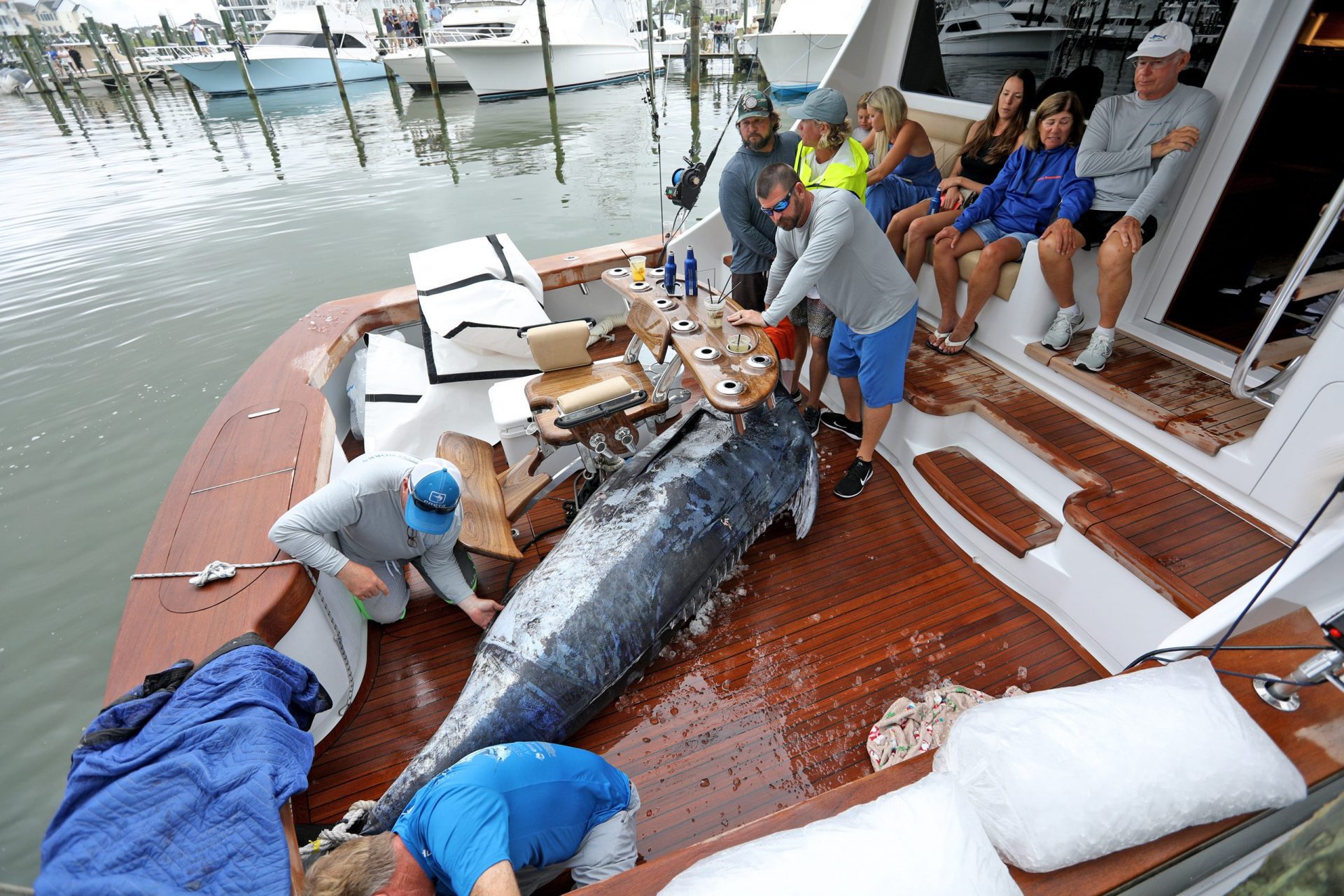 It was indeed a tournament for the ages! The 30th MidAtlantic wrapped up last night and saying it was one for the record books would be an understatement! Records were set in several categories including two before the first day of fishing when a tournament record field of 203 were entered breaking the previous record of 183 set last year. Additionally, the total purse of $5,929,050 eclipsed the previous tournament record purse of just over $4 million set last year as well! While the 2020 MidAtlantic created quite a stir when two 800-pound-plus blue marlin were weighed minutes apart on the final day of the tournament, this year’s event saw the tournament record for that species broken and then broken again a day later! The 30th Annual MidAtlantic will be talked about for a long time!

Day Five of the tournament saw rain cover both tournament venues for most of the day and crews reported offshore conditions were pretty much the same conditions as they dodged squalls and showers for most of the day. 176 boats had Day Five left to fish and while some of the categories may have seemed out of reach, there is always that chance because it only takes one bite! And as we all know, Day Five, known as “Moving Day” at the MidAtlantic, always seems to have its drama and this year it couldn’t have been scripted any better. Jon Duffie’s Billfisher of Ocean City, Maryland was at the scale at 5 p.m. when the evening’s weigh-in session got underway and the crowd had already gathered as the word had spread that he had a monster blue marlin aboard however jaws dropped when they saw the size of the massive blue stretched out in the cockpit of Billfisher. Angler Billy Gurlach battled the huge marlin for 3½ hours on an 80-pound outfit and Duffie reported they had the leader in hand over two dozen times before they were able to sink the gaff. The marlin’s tail hung through Billfisher’s transom door as she sat at the scale and it required a skiff to assist with pulling the fish from the boat through the door so it could be hoisted to the scale. Once on the dock Weighmaster Frank Ingram, assisted by other tournament staff, stretched the measuring tape and noted the length at 136½”, and while she was only 1½” longer than Wolverine’s 958-pounder weighed the day before, the girth of 80” had everyone thinking it may be a grander. It took eight men to heft the monster up onto the scale and it got very quiet as Ingram noted the weight before yelling out “1,135 pounds!” Not only did it break the tournament record set the previous day, but the marlin is also a potential state record for Maryland. Once verified, it would break the current state record of 1,062 pounds caught by Robert Farris in 2009. As you would expect, Billfisher’s blue marlin took the top prize in the category and netted the crew $1,167,762! Rocky Hardison of Beaufort, North Carolina aboard his Wolverine finished in second place with his 958-pounder caught on Day Four and received $198,716 while Larry Hesse’s Goin’ in Deep out of Manasquan, New Jersey finished in third place with his 681-pounder caught on Day One and won $412,237. Worthy of note is the prize money differential is based on the level of tournament sanctioned calcuttas, also known as side bets, the participant enters. The more they enter, the more they can win.

The white marlin category remained unchanged on Day Five and Anthony Martina’s Sea Wolf from Middletown, Delaware took the top prize of $1,017,127 for his 82-pounder weighed on Day Three. Art Boykin’s Berlin, Maryland-based Lucky Duck II finished in second place with an 80-pounder weighed on Day One and took home $162,604. Andrew Dotterweich of Jupiter, Florida aboard his Fish On finished in third place with a 75-pounder and received $680,387.

The tuna division saw nearly two dozen big eyes weighed during the tournament as well as dozens of yellowfin tuna including one of 172 pounds caught by Nicole Scotti on Gina Addeo’s Gina Lisa from Staten Island, New York. However, it would be the big eyes dominating the leaderboard and Chip Caruso from Colts Neck, New Jersey aboard his Pipe Dreamer swept the top two places with big eyes of 235 and 227 pounds weighed on Day Three to win a total of $1,000,065. Bob Hugin of Summit, New Jersey aboard his The Right Place finished in third place with a 188-pounder weighed on Day One and won $244,556.

The dolphin category saw the biggest shakeup on Day Five as all three places changed. Danny Veid’s Amarula Sun from Tarpon Springs, Florida took the top prize of $98,441 for his 45-pounder followed by Tinton Falls, New Jersey’s Ken Hager on his Taylor Jean with a 36-pounder that was worth $36,707. Randy Gibbs of Houston, Texas aboard his Picasso Moon finished in third place and won $16,826 for his 33-pounder.

In the wahoo division Tom Perry of Pasadena, Maryland aboard his Just One More weighed a 58-pounder on Day Five. Perry’s wahoo was the heaviest in the category and won $63,614. Amarula Sun’s wahoo of 57 pounds weighed on Day Three took second place and $68,614. Kevin Moore’s Pasadena, Maryland-based Reel Moore finished in third place and received $3,055 for his 50-pounder caught on Day Four.

As noted above, cash payout differences vary by level of calcutta participation.

The following received calcutta winnings for various positions on the leaderboard during the tournament:

Always a tournament that spreads the wealth to multiple winners, this year’s MidAtlantic saw record payouts for the heaviest white marlin and blue marlin as well as a combined record payout for the top two tuna as each received well over $1 million! In addition to the three $1 million payouts, six others received checks of $100,000 or more and five more received checks of $50,000 or more. Additionally, a record for tuna points was set by Bob Hugin’s The Right Place.