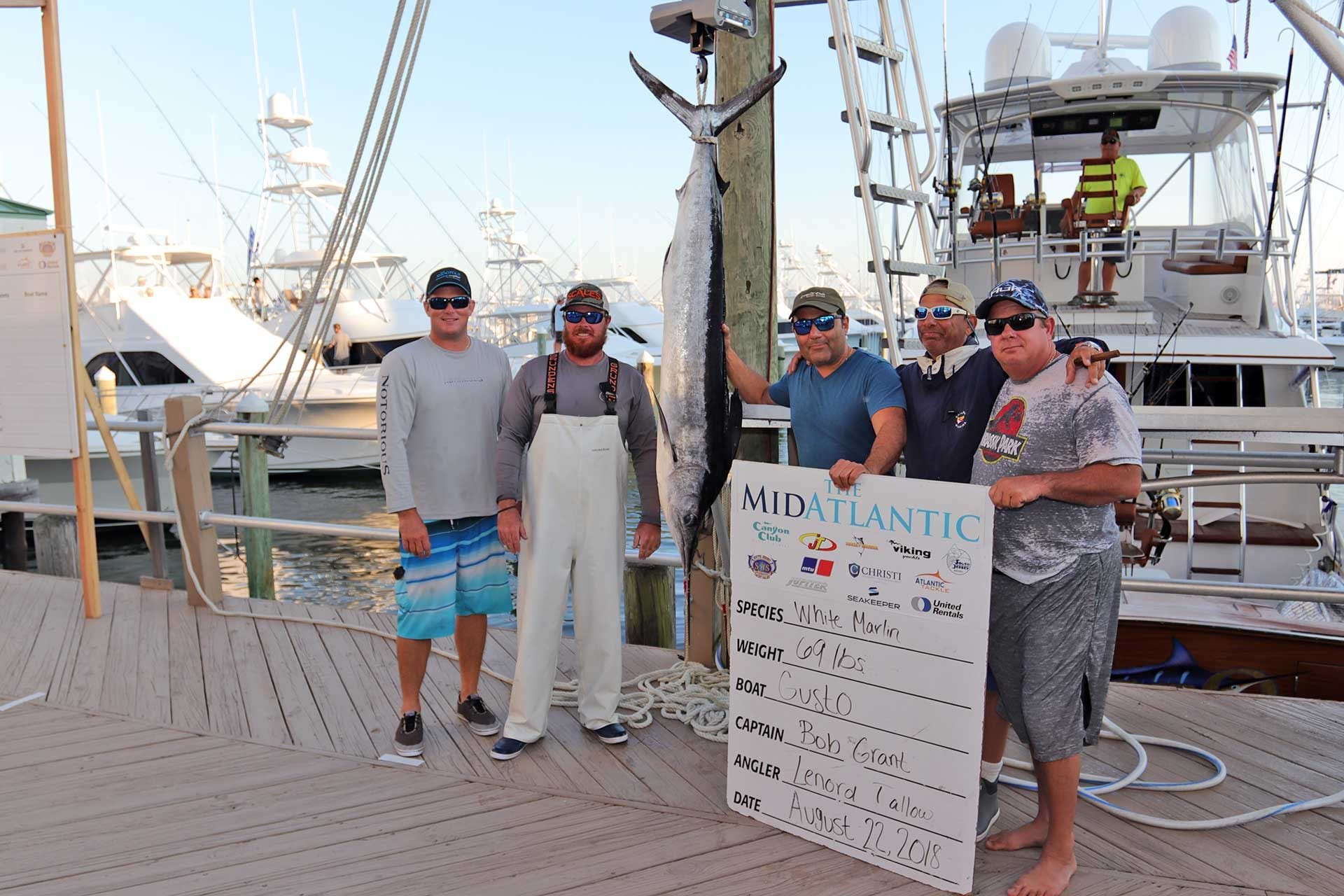 Day Four dawned clear and breezy for the 124 boats heading offshore in the 2018 MidAtlantic tournament and crews were anxious to get back to the canyons. The back-end of the cold front that kept the entire fleet tied to the dock for the first time in the event’s 27-year history on Day Three left sea conditions a bit sporty for most of the day though it was reported conditions began to improve late in the afternoon today.

The big news of the day came in the white marlin category where Captain Bob Grant wheeled Leonard Tallon’s Gusto based out of Islamorada, Florida into third place after weighing a 69-pounder. Captain Jason Genthner had the Tighten Up from Mount Airy, Maryland on the board briefly with a 67-pound white marlin for 14-year old angler Nick Keller but that fish was bumped off the board by Gusto shortly after it was weighed. John Phelan’s Special Situation from Palm Beach, Florida and Justin Branning’s 3’s Enough from Wall, New Jersey remain atop the leaderboard with white marlin of 73-pounds.

As with the previous two fishing days, numerous blue marlin were released though none were weighed today and the category remains wide open.

Though numerous tuna were weighed today none challenged the current leaders and Ed Dunn’s DA Sea from Grasonville, Maryland remains atop the leaderboard with 116 pounder. Chad Jackson’s Toddy Time from Farmingdale, New York and Captain Mark DeBlasio’s Blue Runner from Manasquan, New Jersey remain tied for second as each have weighed big eyes of 114 pounds.

In the dolphin category John League of Annapolis, Maryland moved into second place today after weighing a 34-pounder from his Espadon. Jim Rodgers’ First Light from Hobe Sound, Florida remains atop the board in the category with his 43-pounder. Chuck Weishaar’s The Natural from Hampstead is now in third place with a 33-pounder.

Michael Chase of Villanova, Pennsylvania weighed a 49-pound wahoo today aboard his Contrail to move into second place in that category. Ed Zajdel of Ocean City, Maryland continues to lead with his 71-

pounder caught aboard The Zipper while Joe Posillico’s Torta from Farmingdale, New York is hanging onto third place with his 46-pounder.

The 2018 MidAtlantic concludes tomorrow and with the entire fleet of 157 boats eligible to fish the final day of the tournament it should be another exciting finish to sportfishing’s “Main Event.” Friday has traditionally been “moving day” when the leaderboard has historically seen a complete overhaul. Will the same happen this year? Stay tuned!

2018 MidAtlantic Comes to a Close in Record Setting Fashion!